Horizon will do things quite differently. It won’t have controls that need to be coordinated. The pilot is actually placing simple demands on what is a sophisticated autopilot and flight management system driven by a combination of GPS, inertial platforms, terrain and contour mapping with ATC overlays and multiple LIDAR. To do this, the pilot will have one multi-function, instinctive joy stick and one fore-and-aft slider to change power to the fan for forward flight. People familiar with today’s computer games or drone controllers will recognise our stick and slider configuration.

In the hover, the system will maintain its position and height if the pilot takes his hand off the stick. If he wants to increase or reduce height he will use a two-dimensional button on the top of the stick, forward for down, back for up. In the hover, the stick will be used to position the aircraft over the ground through changing the attitude of the rotor, and twisting the stick left and right will control yaw. If the pilot makes no input the aircraft will assume the newly demanded position and height. To transition from the hover to forward flight, the pilot would select the desired direction using the yaw control and then move the fan control slider forwards whilst pulling back on the joy stick into a climb. The aircraft would accelerate to climb speed until it reached the demanded safe height, when the pilot would level the aircraft and allow the speed to increase to the required max or long range cruise speed.

In fully semi-autonomous mode the pilot would have pre-inserted his flight plan, select “engage” on the flight management system using a button on the joy stick, and the aircraft would automatically turn onto the desired heading and climb to the pre-set safe height and speed. The autonomous functions in the flight controller will at all stages make sure, for instance, that in a turn the power would be automatically adjusted between the propulsion fan and main rotor to maintain height and do whatever is needed to keep the aircraft flying within its safe, stress-limited envelope. Over-stressing the aircraft could result in a maintenance penalty and this would be avoided. It should be emphasised that all aspects of the modification of the flight controllers will be developed and refined, initially using simulation, by Horizon’s experimental test pilot working with Horizon’s development engineers, such that it is as simple and instinctive as possible.

For flight instrumentation, a standard display set-up will be used, with the addition of a synthetic three-dimensional ground/horizon display on the main display. Disorientation through loss of the visual horizon particularly in conditions of low visibility, is a common cause of pilot loss of situational awareness and a significant cause of fatal accidents. This will be prevented because the flight controller will store in its memory a digital map of the terrain that it can reconstruct, using a knowledge of the aircraft’s position and orientation, to create a three-dimensional picture of the terrain below and around the aircraft. If the pilot suffers from spatial disorientation under conditions of poor visibility, all he would need to do would be to take his hands off the controls and the aircraft would revert to wings level at a constant low speed and a safe height, avoiding the ground and obstacles. 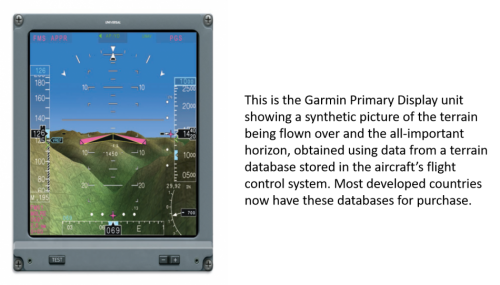 There will be at least two other displays: (1) a terrain display that shows the planned route and how it has been worked out to avoid mountains and other obstacles. Unless over-ridden by the pilot, all flights will be planned at or above the calculated safety height. This will mean that the route can be flown safely under IFR and in IMC, especially if the weather is not as forecast. And (2) an information display that displays such things as anticipated manoeuvres, prioritised aircraft system warnings, obstacles in close proximity to the aircraft and main rotor’s tips, ATC instructions, ADS-B data and possibly weather. Weather radars are not too expensive these days, and there is a possibility that power cable sensors might soon be as well.