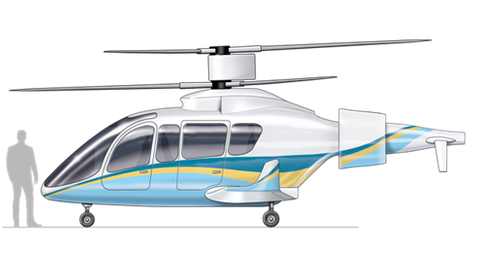 The essence of an Autocopter is that it should be as easy to fly as drive a car, as safe

to fly in as travel by car, able to fly over cities and at night, cruise at high speed for a

helicopter, provide a smooth and relaxed flight at low altitude and, finally, for non-

professional pilots, involve no more training than required for a fixed-wing a/c.

For the Autocopter this means a high degree of engine, drive system, rotor and flight

control system redundancy, plus flight control and planning software that protects the

The Autocopter has been designed to use a combination of power sources and fuels.

With gas turbine engines it can fly of normal jet fuel, diesel, biofuel or, preferably,

speed and range. Synthetic jet fuel, made most easily using CO2 taken from the

atmosphere, would make it carbon zero and with no limitations on speed and range.

name of ‘Distributed IMA’.  Three channels are used with ‘deep’ diagnostics in all of the

distributed modules. The flight control system shares hardware and software with the

off’ in that with known take-off and landing sites, the primary duty of the pilot will be

to ‘see and avoid’.  Otherwise, flying will be semi-autonomous (i.e. between levels 3 and

aircraft that are essentially optimised to suite a variety of missions. The 3 to 4 seat

aircraft will make most of their sales in the Personal Transport and Air Taxi segments.

will be much more highly configured to a specific mission.